So you want to form a home brew club

We are often asked how we got to have such an active home brewers club in our local area. It is simple really & it is all about passion for excellence. Meetings usually have between 12 and 25 members attending and functions typically number up around the 45-50 mark. We have a lot of shift workers and FiFo workers  as well, so it is almost impossible to get everyone together..

About 4 years ago, a few of the local brewers, including Julian Sanders, Matthew Fender and others, gathered with the sole aim of sharing ideas and the odd brew. From those humble beginnings, the momentum started to grow to the point where we now have dozens of members from a town with only 65,000 population. Most are grain brewers, all have been drawn in for the fellowship of the club atmosphere and to improve their knowledge and skills base. We have members from all walks of life, men, women, Tradespeople through Chefs and Executive Chefs, Health Care Professionals & Emergency Services workers to retired Air Traffic Controllers and Pilots.

Around 18 months ago, we promoted the idea of a club within the ranks of customers to form Fraser Coast Bayside Brewers at an initial meeting with the aim of making things more official and structured to facilitate the planned growth & so that if a few members moved on in life or left the area, the FCBB candle would still burn on.

In essence, we held an initial meeting, set a schedule for a monthly meeting and elected a President, Treasurer and Secretary plus Vice President. To get some funds, we ran a couple of cheap raffles to put a few dollars in the piggy bank. Within 3 months, we had enough to incorporate, set up a bank account and have begun a fairly regular education program.

I am pleased that the group has gone from strength to strength and the brewers have gained much, not only in brewing knowledge, but in the form of bonds with fellow brewers. There is a close and open camaraderie and a willingness to welcome people from diverse backgrounds into the group with open arms.

Enough about our little band of merry brewers.

So, you want to form a club in your local area. Excellent!

There are lots of benefits to being in an Incorporated club. Not the least of which is that the club has its own identity, which means it can do stuff as its own identity and the risks are reduced for the members, especially when it comes to being litigated because some numpty fell over the brew pot, bruised their tootsie and had to spend 6 months off work confined in a wheelchair when people are watching. They are out there and they are catered for by an ever growing pool of bottom feeding litigation lawyers. Fear not.

There is no secret to forming an incorporated association and it is not a difficult thing to do. The first thing is to get about a half dozen people together to share a beer or two, talk about the idea and make a decision to make it happen. Undoubtedly, some will prefer to take a backseat and let everyone else do the work. These are usually the least busy in the crowd.

When those around you don't want to make it an official club, but would rather a small group consisting of a couple of drinking buddies. That doesn't take away from the fact they are probably decent folk and good fun. But you will need to understand that they probably won't be major contributors to the overall scheme of things in getting a club started... there are others out there. These guys may well come into the picture along the way and join in or contribute in some way later.

Another thing that is worthwhile doing is to make contact with other clubs in your state to find out about the state body if there is one for Home Brew Clubs. Here, it is the Queensland Association of Amateur Wine and Beer makers Guild. In all honesty, there does not appear to be a cohesive approach from all states, but there is a lot of truly dedicated home brewers out there doing their best and it is a mighty effort. There is an opening for someone who needs a project to fill in a lifetime of dedication to all things beer. In the case of membership to a state organisation, some state bodies have schemes where your club can come under their umbrella for insurance coverage etc for a nominal club fee plus a small fee per financial member. One less headache.

Back to your club - From there, form a small committee... President, Secretary, Treasurer and Vice President. Run a few raffles with small prizes and stash a few bucks away while you sort out relevant paperwork from one of the Government departments below. It takes about 30 minutes to read the instructions and sort the paperwork out for adopting model rules for an incorporated association. It's not rocket science.

Submit the relevant paperwork and required attachments. (Usually minutes of a meeting where it is decided and voted on to become an Incorporated association) Then when the paperwork comes back, it is just a matter of arranging a quick get together at the local bank.

Each state will have it's own set of rules, but none are difficult to understand or follow.

Now, here is a word of warning about banks. Some of the banks do not particularly care for small clubs and associations, except to harvest monthly fees from low balance accounts.  CBA currently charge $10 a month to maintain a small associations account, where as some of the small institutions have excellent schemes, Bendigo bank is one of the latter. Check into these things before making a decision on which bank your club will use.

Congratulations, you have your Home Brewers Club with it's own identity.

For more information on Incorporation of clubs and associations in your state, see the relevant links below:

Here are a few ideas for club gatherings to build interest:

Get together at a local Craft Beer Venue or Pub.

Backyard BBQ - Make it family inclusive. When partners and kids are included, there will be less obstacles. Clubs can be all inclusive and will tend to attract Brewsters as well as Brewers.

Task someone to do a 5 minute talk on a particular beer style, its history and recipe formulation and maybe present it as the style of the month.

Encourage structured tastings - use your state/national score sheets or BJCP etc for this. Use it as a learning tool.

Run a small scale competition where participants are given some feedback.

Have a brewing challenge where a set yeast is used or a set malt or hop and leave the rest of the recipe open for interpretation.

Have a styles day, bring a few portable systems together at one back yard and brew a different style on each, then come together in 6-8 weeks time to enjoy them.

Arrange an online chat with an expert - video conferencing with our group is possible from just about anywhere in the world.

Get together for these with a neighbouring club to build relationships. After all brewing and beer is ALL about community. 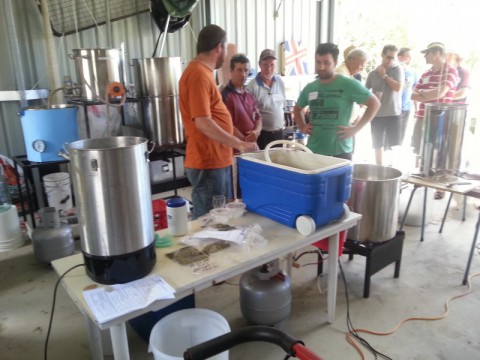